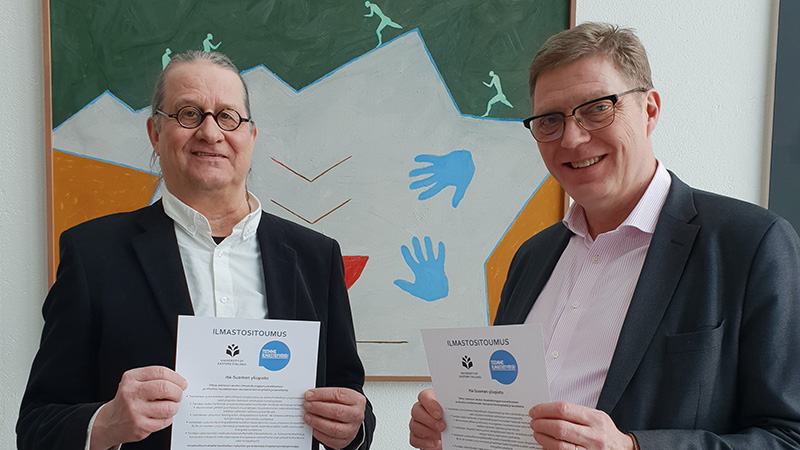 The climate partnership network of the Joensuu region expanded on Thursday, 7 March 2019, as the University of Eastern Finland signed a climate commitment. The university is the 30th member to join the network.

Among other things, the University of Eastern Finland commits to purchasing all the electricity it uses from 100% renewable sources. Moreover, 80% of the district heating used to heat the university’s facilities will come from renewable sources by 2025.

– In Finland, facility heating and energy consumption are the most significant sources of greenhouse gas emissions, when produced using fossil fuels. This is why the University of Eastern Finland’s commitment to renewable sources of energy is a significant factor for our goal of making Joensuu carbon neutral by 2025, says Environmental Manager Jari Leinonen from the City of Joensuu.

Other measures to be taken by the university within the framework of the climate commitment include reducing travelling and preferring remote participation, public transport and car-pooling, taking sustainable development into consideration in procurements, reducing waste and plastic waste in particular, and making recycling increasingly efficient.

– For the City of Joensuu, the university is a significant pull factor. Through the climate commitment, the university participates in Joensuu’s climate work and set a wider example of environmental responsibility. We are pleased to have the university in our partnership network,Leinonen continues.

The climate partnership network of the Joensuu region is comprised of organisations and communities committed to systematic climate work. The network was launched by the Ilmastotori project running in 2015–2017. The network includes organisations and communities of different sizes, all of them sharing an interest in environmental and climate work.